When it comes to converting the power so it can be used by household appliances or some electronic devices, we have two possible choices: a DC to AC power inverter and a gas-powered generator. The main differences you will encounter while making the decision include factors such as fuel, efficiency, and noise.

Unlike the power inverters, generators convert power from gasoline. Unfortunately, gas can be stored for as long as one month without using any additives. That is why if you are going to use the gas generator as a backup power plan, you will need fresh gasoline all the time. Power inverters, on the other hand, convert battery power which can be way more convenient. Plus, a standard 5000-watt gas-powered generator runs through one gallon per hour. So, if you think that storing fresh gas would be a problem, a power inverter would make a better choice.

Portable fuel powered generators are able to produce a lot more power than the power inverters. The size of the tank as well as the mechanical difference in the production of electricity have a huge impact on the power. The generators are often more bulky due to the large fuel tank. That is not necessarily a bad thing as a bigger fuel tank means larger output power. 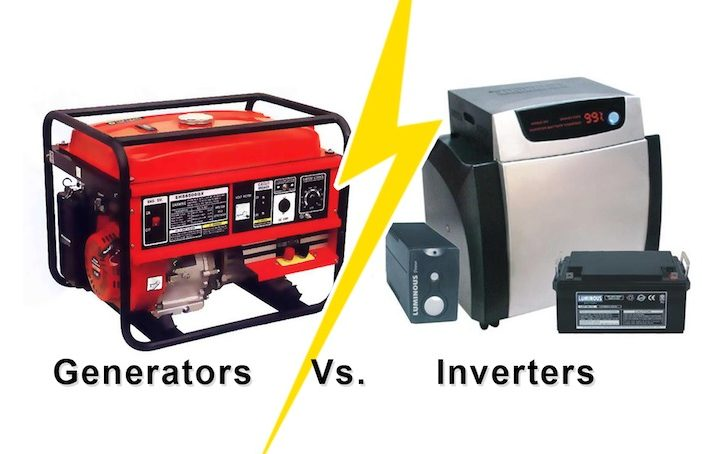 Both power inverters and gas powered generators will supply you with enough power to run your devices. However, in order to know how much power you are going to need, you must calculate the amount of power that will be enough to start up the devices necessary during the power outages and keep them running. Still, if efficiency is a big deal to you, we highly recommend you to buy a Pure Sine Wave inverter.

Having some sort of backup power supply can significantly help you during the power outages and blackouts. Gas powered generators come with a lot of advantages. Still, if you are looking for a silent and more efficient backup power supply, power inverters make a much better choice. But, the standard conventional portable generators are way more powerful. They are also a better option if you live in the area where power outages are a very common thing.